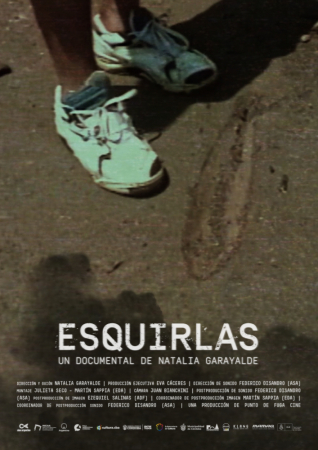 On November 3, 1995, the Río Tercero Military Munitions Factory, the emblematic industry of my hometown, exploded. Thousands of shells were fired against the city that had produced them. I was 12 years old, and while I was trying to escape from the blast, I recorded the devastation of my hometown with a video camera. Twenty years later I found those tapes. The explosion hid the largest gunrunning in which the Argentine government was involved. The city continued to grow despite the tragedy but the threat of the industrial and military sector is still persistent at the present time.

How many times have we seen a film shot by a young girl? Natalia Garayalde uses her family’s archive, recorded by her during her childhood, to show how tragedy suddenly enters the life of a normal family, with the violence of a war that transfigures the everyday landscape until it becomes unrecognizable and threatening. Splinters uses the first person to relate one of the darkest episodes in Argentina’s recent history, the explosion of an arms factory in Río Tercero, which occurred on November 3rd, 1995. In the film, we see how little Natalia Garayalde records the landscape of destruction with a beautiful and unprecedented infantile gaze, one who can play and be excited even among the ruins; at the same time, the voice of the director, now an adult, guides us through the archive images to give them an even more violent meaning, as she reveals the very serious political liabilities of the Menem government behind the accident. The most disturbing aspect of this dialogue between the Natalia of 1995 and that of today resides in the discovery that, as invisible as the smell of ammonia from the bombs, death has penetrated the family’s life, marking it forever. The vital impetus of the young filmmaker shooting the day after meets in a heartbreaking way with the director who has lived in all its gravity the omens of death accumulated in those childhood images.