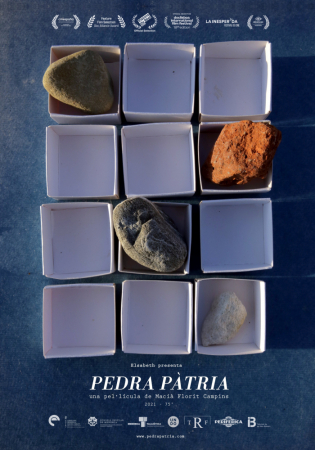 Macià and Lau are two brothers born in Menorca, in the heart of the Mediterranean Sea. Now a filmmaker, Macià resides temporarily in the United States, while Lau, the little brother, is a peasant who has stayed on this small rocky island. From a collection of images, letters and drawings with an organic texture, the story takes us to the lost paradise of childhood, constantly eroded by the force of the waves, the Tramontana wind, distance and time. Hidden in the memory of stones and lunar landscapes are the sources of local identity, traditions and pagan rites of the summer solstice, perpetuated from generation to generation. “At what point did our paths part?” wonders the director with a soft mixture of melancholy and guilt while his brother, dressed in sheepskin, plays the role of John the Baptist during the celebration of the Saint. In this intimate journey of brotherly love, it is the prodigal son who looks at himself in the reflection of his younger brother, while reflecting aloud on the limits of memory and images. (Javier Martín, Visions du Réel)

Macià Florit is a film director and editor born on the island of Menorca in 1990. He graduated in Humanities in Pompeu Fabra University and, thanks to the DOCMA scholarship, he studied in Madrid the Master in Documentary Film at the IPECC - Matadero Cultural Center. Established in Barcelona since 2015, he works as an assistant director, camera operator and editor at the independent production company Elsabeth. His professional experience includes the production of cultural programs for television, music videos and documentary and fiction films. In Menorca, it gives audiovisual training workshops for young people with the collaboration of the Menorca Film Festival and other entities on the island. After directing four short films, in 2018 Macià received the Reynolds grant to develop his first feature film, “Pedra pàtria”, which premiered in Doclisboa, Visions du Réel and La Inesperada in 2021.

MajorDocs is a festival with no submission fees, neither national nor regional. So, the fact that a film made by a Balearic filmmaker has made it into this year’s official competition shows the good health of the films produced in the Balearic Islands, and that on its own is a reason for joy.

Native Rock (‘Pedra Pàtria’) is a film that flows easily between the essay, the visual poem and the open letter. In this debut feature, Macià Florit bravely and calmly confronts the many questions accumulated over the years and the desire to understand from a free point-of-view the differences between the past and the present. Thus, he explores from exile the bitterness of uprooting while tracing the differences with his brother, Lau. How can two beings raised in the same family perceive, feel and long for things in such radically different ways?

The scenes of Native Rock are like waves: each one uniquely crashing against the shore, while seeking to describe from a microcosm of stones, land and sea, the great aspects of the existence of Humanity.

Florit manages to elevate Menorca from mere landscape to a full character. An island with as many layers as geological strata, an exploration of a personal story that comes from a subjective and serene nostalgia that never falls into sentimentality.