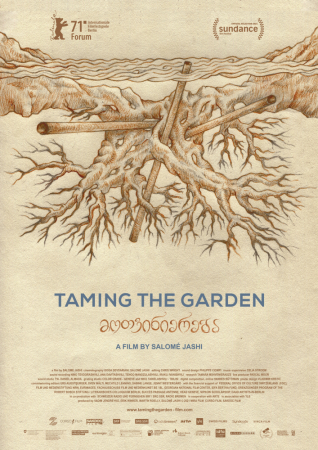 A powerful man and anonymous man has developed an unusual hobby. He buys century-old trees, some as tall as 15-story buildings, from communities along the Georgian coast and has them excavated to collect them for his private garden. In order to transplant trees of such dimensions, the landscape surrounding them is ripped apart and the people living around them are forced to adapt to the disruption. As the film follows this process, it portrays the needs and values of today’s Georgian society and reflects on the theme of forced migration, where “uprooting” is more than a metaphor.

Salomé Jashi was born in Tbilisi, Georgia in 1981. She first studied journalism and worked as a reporter for several years. In 2005 she was awarded a British Council scholarship to study documentary filmmaking at Royal Holloway, University of London. Salomé’s The Dazzling Light of Sunset (2016) was awarded the Main Prize at Visions du Réel’s Regard Neuf Competition as well as at ZagrebDox, Jihlava IDFF, Valdivia IDFF, and several other festivals. Her earlier work, Bakhmaro (2011), made in co-production with ma.ja.de. filmproduktion and MDR/Arte, received an Honorary Mention for a Young Documentary Talent at DOK Leipzig, was awarded as the Best Central and Eastern European Documentary at Jihlava IDFF, and was nominated for the Asia Pacific Screen Awards and Silver Eye Awards. Salomé is the founder of two production companies: Sakdoc Film and Microcosmos, both producing documentaries and fiction of high artistic quality. She was a fellow of Nipkow Scholarship in 2017 and DAAD Artists-in-Berlin Program in 2020.

A powerful magnate, and former prime minister of his country, has a peculiar hobby: he has decided to collect trees and that is why he transplants them from the original soils in which they grew to his private park on the Georgian coast.

That man never appears in Salomé Jashi’s film but inhabits it with an intimidating absence. Its presence is latent and oppressive. This has a lot to do with the surreal principle from which the documentary starts, but especially with the way the director films and lives the pace of shooting. Taming the Garden is a slow and contemplative film, the product of two years of shooting, in which each situation expands like the roots of so many species of trees that now float between the waters that link the Caspian Sea and the Black Sea until reaching their new destination.

There is something unique about the representation of space and the beings that inhabit it. While it is true that peculiar Caucasian spirit nourishes the film with absolute singularity, Jashi does not stop questioning increasingly global concepts. We live in times where even the most capricious wishes can be realized at the cost of exploitation, extortion and degradation of the dignity of others. It is not just a matter of extracting trees from their original soils, hoarding oxygen, modifying landscapes. The image of those violently uprooted roots indicates to us what power is capable of and the result cannot but awaken, not only in those involved but also in the spectators, a feeling of mourning, desolation and emptiness.

Jashi’s camera observes the details in a masterful and precise way and grants a wonderful corporality both to the trees that are beautiful and photogenic beings in themselves, as well as to the machinery used in the engineering processes necessary for each removal. Formally impeccable, Taming the Garden is a film very respectful of its own method, faithful to its concept and highly political; a work that mesmerizes by its rhythm, its sounds and its long times.