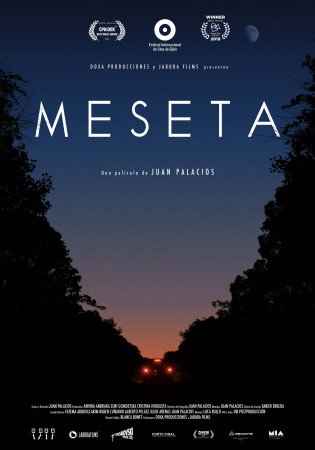 A prayer in the form of a film, shot with a meditative camera that caresses over the beautiful Spanish landscape with an extraordinary textured soundscape to match. Inland succeeds in telling a vulnerable, vivid and sprawling story about the challenging present of a group of farmers in a remote yet beautiful village. But the territory is boundless, as is the state that Palacios’s film puts you in.

Shot over a period of four years, his film’s episodic nature is shaped by the characters and locations he has encountered along the way. An older photographer contributes to the fresco with images that make peasants look like passers-by in ‘Don Quixote’, and when a car drives off into the twilight, the headlights make a whole shrub move around in a black silhouette under the wide and deep blue sky, where a single star is shining.

(1986, Basque Country) Educated in Environmental Studies and Audiovisual Communication. He works with experimental video, observational documentary, and visual-diary film essays. With a particular predilection for the boundaries between human culture and nature, mysticism and materialism, he mostly employs imagery from a factual world without an apparent mise en scène to create an alternative universe.

His first feature documentary film, PEDALÓ, won the Irizar Basque Film Award at San Sebastian International Film Festival, 2016 and The Best Feature Documentary Award at Bushwick Film Festival in New York in 2017. His second feature film, INLAND, had its world premiere at CPH:DOX 2019 where it was awarded with a special mention.